The Apple Watch 7 and the Garmin Fenix ​​7 are two of the greatest options for individuals seeking a new smartwatch. Both have a slew of features and usefulness and are excellent smartphones in their own right. They are, however, highly diverse and cater to distinct needs, so it’s worth comparing them to see which one offers the tools to suit hardcore fitness fanatics better.

The Apple Watch Series 7 was launched last September, and it drew a lot of flak from critics for not providing any groundbreaking new features that many customers had been asking for. However, it is Apple’s best smartwatch yet and one of the top products in the market. The Garmin Fenix ​​7, which was released earlier this year, has a number of unique features, including solar charging (select models) and a battery that can last up to 18 days.

Both watches include standard options in terms of health and fitness tracking, such as heart-rate trackers, SpO2 sensors to assess blood oxygen levels, and the required sleep tracking functions. The Fenix ​​7, on the other hand, includes a thermometer that can assess the wearer’s body temperature during workouts. Both come with GPS sensors, but the Fenix ​​7 has many more capabilities, including automatic climb detection, advised training sessions, anticipated race finish times, and a real-time stamina meter, among other tools for serious athletes. At the same time, it lacks the key ECG sensor that is one of the Apple Watch’s standout features.

The Apple Watch 7 has many advantages over the Fenix ​​7, including third-party app support, courtesy of Apple’s existing software and service eco-system. This makes it the far superior choice for the vast majority of users. The Fenix ​​7 outperforms the Apple Watch, though, with a more extensive set of sports monitoring and fitness tracking choices. This contains a seven-day training regimen tracking system that allows users to keep track of their daily training load to avoid overtraining athletes. The Fenix ​​7 also has golf-specific capabilities, including information on thousands of courses, shot detection, scorecards, a vector map, and more. 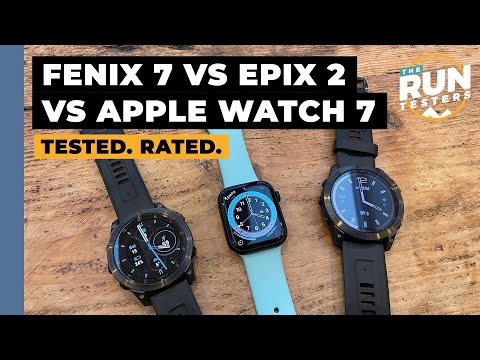 The Apple Watch 7 and the Garmin Fenix ​​7 are available in various combinations and sizes. The Fenix ​​7 comes in eight different variations, including three different sizes (42mm, 47mm, and 51mm), three various build materials (stainless steel, titanium, and DLC titanium), and three different screen protection methods (Corning Gorilla Glass, Sapphire Solar Glass, and Power Glass). They also come in a variety of hues, which increases their attractiveness among a wide range of users. Meanwhile, the Apple Watch is available in two sizes (41mm and 45mm), three case materials (aluminum, stainless steel, and titanium), and a variety of straps such as metal, silicone, and woven fiber.

Another significant distinction between the two is their pricing. The Apple Watch Series 7 starts at $399 and can go up to more than $1,000 depending on the case and band material chosen, whereas the Fenix ​​7 starts at $699 for the entry-level model and goes up to $999 for the top-end option. Overall, the Garmin Fenix ​​7 and the Apple Watch 7 are distinct products aimed at different buyers. The Fenix ​​7 is intended for extreme fitness enthusiasts, professional athletes, and endurance trainers. Despite its high price, it is the company’s most advanced multi-sports watch to date, and it is unquestionably the best alternative for dedicated athletes and fitness users. The Apple Watch 7, on the other hand, is more suited for mainstream customers, and its lower price tag makes it an obvious smartwatch choice for broad use.